In the past the Lake Erie CWMA has contracted external entities for prescribed fire, aerial spraying, mowing and smashing activities on agreement lands. Mowing, smashing, seeding and ground spraying activities were previously handled in-house by CWMA employees using tractors, backpack and ATV-mounted sprayers, and seed-spreaders. However, the CWMA is shifting toward an all-contract approach for management activities. Conducting the work in-house means assuming liability if things go wrong and since the CWMA is not a stand-alone entity, this puts the steering committee organizations and agencies at risk. By contracting the work out the contractor can be held responsible for ensuring the work is done according to both law and contract. Treatment techniques have remained the same for the CWMA throughout the project period, but use is dependent on funding. Projects generally begin with herbicide application, whether it is a ground application from a marsh master, or aerial application by helicopter. If funding is available and the landowner requests it, further actions may be taken on a property such as controlled burns and smashing.  Anecdotal reports and monitoring data both show that prescribed fire is essential to site restoration following herbicide control. Standing and smashed Phragmites have been burned with similar successful results.  Mowing proved difficult to accomplish and was replaced with smashing (rolling).  Reseeding with native seed mixes did little to improve the existing native seed bank already present in treatment sites. 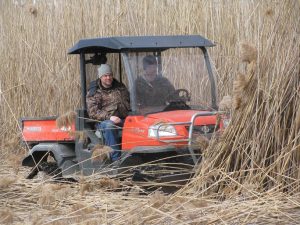 In 2015, there were roughly 1,200 acres of invasive species treated on properties including private hunt clubs, refuge and state lands, and park districts. Around 100 acres were treated by ground spraying and another 1,100 acres treated by aerial application.

Spraying is usually done in the later part of summer, late August-September, as the plants begin to take in nutrients before the upcoming fall/winter. Burning and smashing is usually done in the winter/spring months.The steering committee, through numerous meetings and discussions, has determined the species that pose the biggest threat to the northwestern Ohio region. Overall, the steering committee prioritizes species that can be effectively controlled by using the same management techniques being used to combat Phragmites. These species include purple loosestrife and flowering rush, both of which are abundant and detrimental to the same habitats where Phragmites is already being treated.