In the spirit of the spooky season, we wanted to highlight a commonly observed Phrag Phenomenon: witches’ broom! What is witches’ broom?

Witches’ broom, or ‘hexenbesen’ in German, is a plant deformity characterized by tufted growth of leaves or branches in herbaceous and woody plants. The abnormal growth form is usually caused by parasites such as bacteria, viruses, fungi, or insects, but can also be caused by herbicides. When growing normally, plants exhibit ‘apical dominance’, where the central (apical) stem grows stronger than the lateral or side stems. This allows the plant to grow taller and compete with other plants for light. However, if the plant is released from apical dominance either by disease, parasites, or herbicides, then auxin (a plant growth hormone) production is reduced, and the lateral side shoots can grow stronger, causing a bushy appearance visually similar to a gnarled old broom. In fact, witches’ brooms have historically been used to fashion actual brooms in Europe1!

Depending on the cause and severity of the deformity, the effects of witches’ broom on plants can range from mild inconvenience to eventual death. It’s not all grim though: witches’ brooms in trees can provide great habitat for birds and squirrels2,3!

Causes of witches’ broom around the world

A plethora of parasites cause witches’ broom across a variety of plant taxa. Perhaps most notorious is the fungus Moniliophthora perniciosa, which causes Witches’ Broom Disease (WBD) in cacao (Theobroma cacao) and was responsible for the collapse of Brazilian chocolate production in the 1990s. This fungus leads an interesting lifestyle that could be straight out of a horror movie, first infecting the host plant while it is still alive, then manipulating the plant’s growth hormones to induce WBD, and later continuing to feed on the plant’s necrotic tissue after it has been killed4. Rhodococcus fascians is a bacterium that commonly causes witches’ broom in angiosperms or gymnosperms by affecting the plant’s growth hormones, namely cytokinin, to release the plant from apical dominance5. This bacterium also causes leafy gall disease and is a threat to tobacco plants (Nicotiana tabacum) and other crops. Viruses, such as Rose rosette virus, also cause witches’ broom, which in this case is a symptom of the often-lethal Rose rosette disease. A mite (Phyllocoptes fructiphilus Keifer) spreads the virus, affecting roses across the United States6. Similarly, the Longan witches broom-associated virus causes Longan Witches Broom Disease in the east-Asian longan tree (Dimocarpus longan) and is spread by several insect vectors. Witches’ brooming prevents proper flowering and fruit production of the longan tree7. Witches’ brooms are usually easy to identify but note that mistletoes (Order Santalales) are parasitic plants that can be mistaken for witches’ brooms in trees. Even more confusing is the fact that parasitism by mistletoes can actually induce witches’ broom along tree branches2, so it is probable that both can be found on the same tree. While the causes of witches’ broom are highly diverse, they yield the same result: release from apical dominance.

Herbicide application can also cause witches’ broom in both woody6,8–10 and herbaceous plants11–13. Herbicides in the class imidazolidinone are acetolactate synthase (ALS) inhibitors that halt the production of necessary amino acids, resulting in reduced growth or plant death. The apical bud is typically killed during this process, causing hormone disruption and releasing the axillary or side buds from apical dominance14. Witches’ broom is a sub-lethal effect of these herbicides if they are applied at low concentrations or not properly absorbed by the plant, although it is typically coupled with arrested development of new tissue. However, in some cases, incidence of witches’ broom caused by low concentrations (<25 µg/L) of imazamox can even increase biomass of treated aquatic plants15. Glyphosate, another common herbicide, can also cause witches’ broom in some plant species, either during the season in which the treatment is applied, or during the following growing season. If glyphosate is applied during the fall translocation period it is usually effectively absorbed by the plant, but if treated too early, regrowth of plants with witches’ broom may occur the following growing season10. Increases in stem density may also co-occur with witches’ broom after glyphosate is applied13. Recovery from witches’ broom is occasionally possible9,16, but regrowth rates may remain low16.

There are several causes of witches’ broom in Phragmites. The most common is the use of herbicides such as glyphosate, imazapyr, and imazamox. As in other plants, these herbicides can kill the apical tip or meristem of the plant, promoting growth of multiple axillary shoots from a single node17 on the rhizome (many thin stems emerging from a single rhizome node) or on the stem (a single thick stem split into many small stems above ground; see photos below for examples of both growth forms). In an experiment by Cheshier (2010)18, witches’ broom was present in all Phragmites plants treated with imazamox. Care should be taken when using herbicides on Phragmites in sensitive areas, as several wetland plant species are also subject to imidazolidinone-induced witches’ broom12.

As part of July monitoring for the Phragmites Adaptive Management Framework (PAMF), U.S. Geological Survey (USGS) and Great Lakes Commission staff note incidences of witches’ broom at PAMF management units around the Great Lakes basin. Of 16 management units where witches’ broom had been noted, all had been treated at some point with either glyphosate or a combination of glyphosate and imazapyr. The PAMF Participant Training recommends that witches’ brooms’ stems be counted only as a single stem if there is one basal stem with many branching stems above the ground (example A, below). However, if all the stems emerge from the ground individually, (example B, below), they should all be counted as separate stems (in this example, there are four stems). A guide to counting stems as part of the Phragmites Adaptive Management Framework (PAMF). A. A single, branched stem is counted as one stem. B. Multiple stems should be counted separately. Credit: Taaja Tucker-Silva, U.S. Geological Survey, for the PAMF participant training course.

There is some evidence that pathogens can also cause witches’ broom in Phragmites. In 2012, researchers in China found that more than half of the Phragmites plants at a university experimental station were exhibiting witches’ broom and stunted growth. DNA extracted from the plant tissue tested positive for phytoplasma infection19. Phytoplasmas are specialized parasitic bacteria that infect the phloem of plants and cause plant diseases in >1000 plant species around the world20. In this case, the isolated phytoplasma was identified as Candidatus Phytoplasma ulmi, which has caused witches’ brooms in several other plant taxa in China19, but typically causes yellowing in elms (Ulmus spp.)20. Currently, phytoplasma-induced witches’ broom has not been reported in North America.

Have you seen witches’ broom while managing Phragmites? If so, this is a pretty good indication that the plant is stressed from the management actions you’ve taken. Let us know by noting it in the comments section on your PAMF monitoring sheet next summer! In the meantime, Happy Halloween from the Great Lakes Phragmites Collaborative! 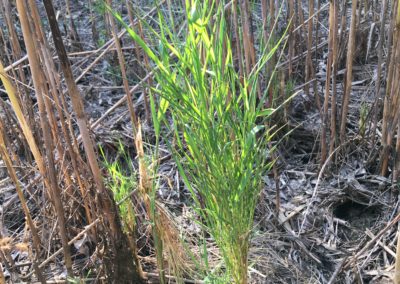 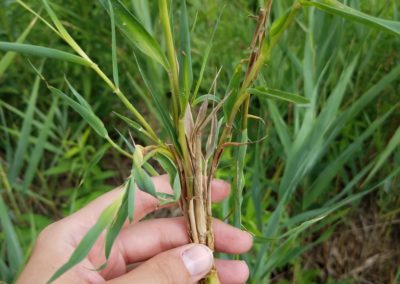