Although non-native Phragmites australis reigns supreme in terms of publicity, it is important remember that we also have stands of native Phragmites throughout the Great Lakes region. It can be difficult to distinguish between the native and invasive haplotypes while in the field, but many resources exist to help people identify which one they are dealing with. Distinguishing native from non-native Phragmites is important since focusing control efforts on the native haplotype can waste materials, person hours, and money, and result in unnecessary spraying of herbicides into the environment.

Where Is Native Phragmites Found?

According to the University of Michigan herbarium records, native Phragmites has been documented in 30 out of the 83 Michigan counties. Many of these records are decades old, so its current extent is less well understood. Through a brief and informal survey of land managers and some on-the-ground scouting, USGS and partners have identified five additional patches in southeast Michigan. Our search was in no way comprehensive, but our findings indicate that native Phragmites is much more common than we had initially anticipated. At some of these sites, non-native Phragmites was also present and, in some cases, growing right alongside the native haplotype. These findings raise some very interesting scientific questions, but also heighten the concern of accidental treatment of native Phragmites when targeting non-native Phragmites.

Tips to help tell them apart

The following are few quick pointers to help distinguish between the two while in the field:

Color: Side by side, the leaves of the invasive appear bluish, while native leaves are more yellow (this determination is difficult to make when you only have one haplotype at hand); live stems of invasive are dull green, whereas native stems frequently appear reddish or purplish.

Ligule length: Non-native ligules are approximately half the length of native ligules (0.1-0.4 mm for invasive haplotype compared to 0.4-1.0 mm for native).

Density: Stands of non-native Phragmites are typically very large, tall, and dense (i.e. hard to walk through easily) while native stands are usually integrated with a more diverse plant community and not as dense. The pictures above show different growth patterns of invasive and native Phragmites. The left side of the photo shows a very dense senesced growth of invasive Phragmites, as opposed to the picture at right which displays the sparse stems of native Phragmites growing alongside other wetland species. Photo credits: Wes Bickford and Katherine Hollins

There are many resources online and in print to help aid in distinguishing between the two haplotypes. Some great examples can be found at:

To confirm our morphological identification of the native plants we found during this fall’s field work, we sent leaf tissue to Dr. Doug Wendell at Oakland University. Doug analyzed DNA polymorphisms in both the native and non-native strains to further distinguish between the two using the methods of Saltonstall (2004). 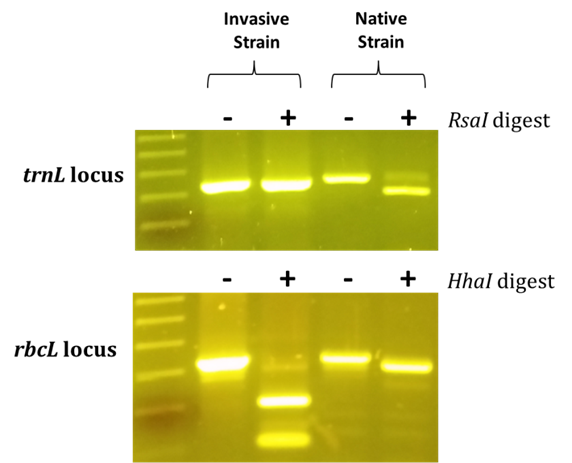 If you need genetic confirmation for whether your Phragmites is native or invasive, then consider contacting one of the following cooperating laboratories:

Native Phragmites is more prevalent in the Great Lakes than we previously assumed. It is frequently found in wetlands with high biodiversity and also supplies food and nesting resources for wetland residents. Care is needed before and during management of non-native Phragmites, so as to not spray and kill its native counterpart.  It is possible that native Phragmites is present at the site you are managing, so be sure to take caution when applying management techniques.