Who is bugging Phragmites? The insect herbivores of Common Reed

Each year in July, participants in the Phragmites Adaptive Management Framework (PAMF) head out to monitor their invasive Phragmites patches. As a part of the PAMF monitoring protocol, participants fill out a survey form in which they are asked to look for signs of stress on their Phragmites plants (e.g., broken stems, wilting leaves, and/or herbivory). Frequently these signs of stress are caused by insects, but what kinds? Around the world, 172 species from 8 orders of insects feed on Phragmites, and likely many more use the plant for other purposes (Figure 1; Tewksbury et al., 2002). The most common Phragmites feeders are insect larvae and stem from (pun intended) the orders of Diptera (flies), Lepidoptera (butterflies and moths), and Hemiptera (true bugs). While most insects munch on at least a few other plant species, many (39%) are obligate herbivores, feeding on Phragmites alone (Figure 2). Insects are harmful to Phragmites but do not completely flatten fields to fatten up: they only eat about 1% of net Phragmites production but in doing so can severely reduce plant growth and flowering (Imhof, 1979). 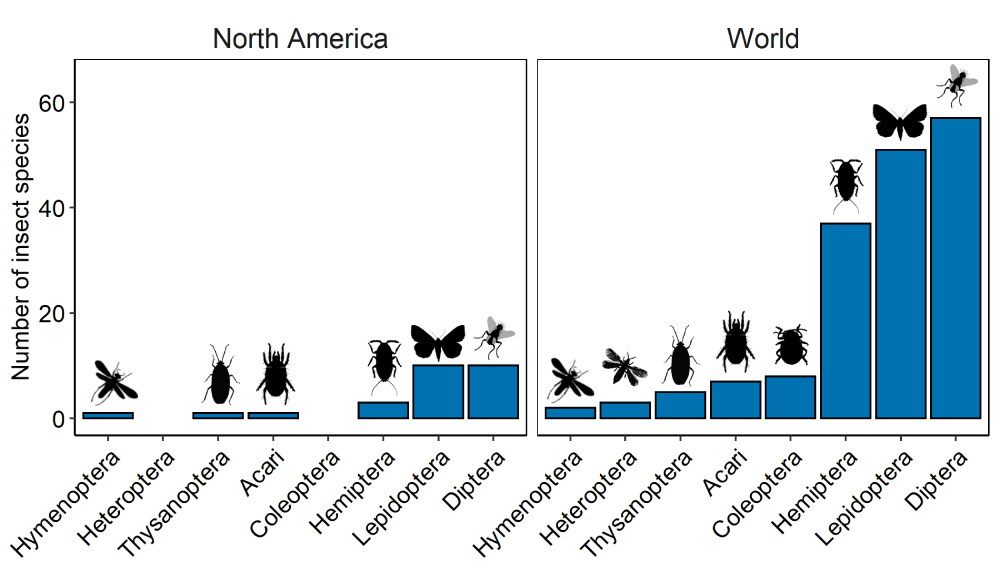 Figure 1. Number of insect species per taxonomic order documented feeding upon Phragmites australis in North America and elsewhere across the world. Adapted from data in Tables 1 and 2 in Tewksbury et al. (2002).

Of the insect species that feed on Phragmites, a majority (35%) target the stem of the plant, either consuming it directly or burrowing into the stem, which in some cases leads to gall formation (Tewksbury et al., 2002). Galls are abnormal growths created by plants around an area where tissue has been disturbed (see examples here). If a gall is not present, sometimes holes left by burrowing insects can be observed on the stem. Stem damage to Phragmites by insects is variable and depends on the species. Some insects can be highly detrimental to the plant, limiting stem height, reducing or eliminating growth of inflorescences (flowers), altering growth patterns, or opening up the plant to secondary insect invaders (Blossey, 2014; Tscharntke, 1999), but infestation by other insect species can incur minimal disturbance to the plant (Blossey and Weber, 2000). Another 34% of insect species target Phragmites’ leaves by chewing or leaf mining (Tewksbury et al., 2002), although chewing usually has little effect on the plant itself. Chewing damage observed in North America and Europe is usually low, resulting in <0.01% loss of plant tissue (Cronin et al., 2015). Few insects feed on the flowers (2%) or the rhizomes of Phragmites (5%; Tewksbury et al., 2002). 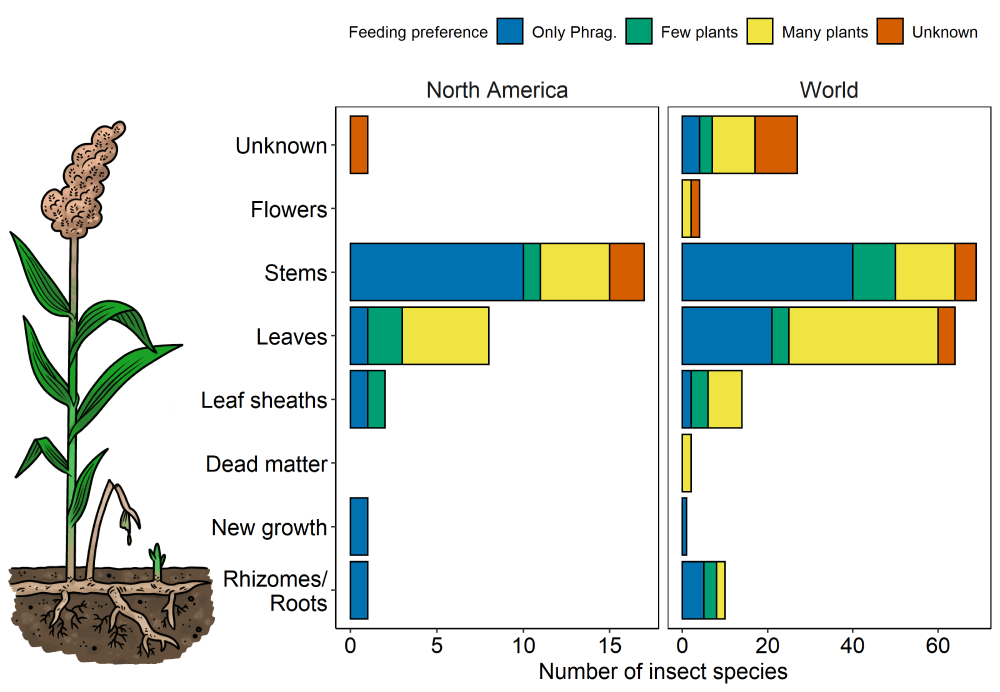 Figure 2. Number of insect species found feeding on each part of Phragmites in North America and elsewhere across the world. Adapted from data in Tables 1 and 2 in Tewksbury et al. (2002). Color indicates the feeding preferences of those insects: whether they feed solely on Phragmites, a few different species of plants, many different species of plants, or their feeding preferences are unknown. “Stems” indicates feeding on the stem or forming a gall.

So, what kind of insects might you encounter in native or nonnative Phragmites stands? Below we have compiled a list of some of the most common, most interesting, and most anticipated Phragmites herbivores found in North America. You may be wondering, “Most anticipated? You mean they’re not here yet?” Yes—some species of moths are currently being considered for introduction to North America as a form of nonnative Phragmites biocontrol. Read on to learn more!

Touted by some researchers as the most important herbivores of Phragmites currently found in North America (Cronin et al., 2015), Lipara rufitarsis and L. similis are two species of introduced gall fly that consume only Phragmites. These flies may have invaded by hitching a ride inside dead Phragmites stems used as packing material (Blossey and Weber, 2000). Adult flies lay eggs on young Phragmites shoots and the newly hatched larvae burrow in, consuming the shoot on the inside, shortening the stem and reducing flowering. A single larva then overwinters inside the dormant stem. Lipara flies are not found in most places with Phragmites, but when they are present, they can infect 11% of stems (compared to a mere 1% in their native range; Allen et al., 2015). In some places, 50-80% of stems are impacted (Hazelton et al., 2015; Lambert et al., 2007). Unfortunately, these insects also target native Phragmites, and at higher rate than nonnative Phragmites (32% vs. 11% of stems, respectively). This discrepancy may be because nonnative Phragmites has evolved resistance to Lipara that native Phragmites has not (Allen et al., 2015). Click here to see more photos of L. rufitarsis and L. similis larvae and their impacts on Phragmites plants.

How can you tell if a plant is infested? You may see a smaller shoot without flowers, the presence of a cigar-shaped gall and/or flagging/dryness of the top leaf (note that L. similis does not make a gall). If a gall is present, it may have a dry leaf extending from the gall. You can find larvae inside the stem.

Another introduced species commonly found on Phragmites in North America is Hyalopterus pruni, the mealy plum aphid. Aphids have a strange and interesting life cycle, quite different than our other insect herbivores. Aphid eggs are laid on plum trees (barring that, apricot, peach, or almond will do) and overwinter there. In the spring, the eggs hatch and these aphids reproduce and feed on the plum. Then, some alates (winged adults) are produced and they migrate in the summer to their secondary host: reeds like Phragmites. These winged adults start a new colony on Phragmites, producing a protective wax circle around themselves and the new nymphs. Eventually more winged adults will emerge from this colony and return to the plum to start the process over again. Mealy plum aphids are 70% more common on native than nonnative Phragmites (Cronin et al., 2015; Park and Blossey, 2008), but overall they are much more prevalent in European stands of Phragmites than in those of North America (Cronin et al., 2015). Scientists do not yet understand the effect aphids may have on the fitness of Phragmites (Cronin et al., 2015). Click here to see some great photos of aphids and the plant damage they cause.

How can you tell if a plant is infested? Look closely! Aphids will be present along with a white waxy substance on the leaves or stem.

Two shoot-boring moth species in the family Noctuidae are being considered for introduction to North America from Europe for use in biocontrol of nonnative Phragmites: Archanara neurica the white-mantled wainscot, and A. geminipuncta the twin-spotted wainscot (Blossey, 2014). Archanara adults lay eggs under the leaf sheath of Phragmites, where the base of the leaf wraps around the stem. Because nonnative Phragmites retains its leaf sheaths throughout the dormant period, it is a more likely target for Archanara moths than native Phragmites, which sheds its leaf sheaths (although see the following articles for debate on this issue: Cronin et al., 2016; Bhattarai et al., 2016; Blossey and Casagrande, 2016; Kiviat et al., 2019; Blossey et al., 2020). The eggs hatch in the spring, and the larvae find soft new shoots to burrow into. Development of the two moth species slightly differs. Usually a single A. neurica larva is found per shoot, which will switch to a new shoot 1-2 times during its development (Blossey, 2014). A. geminipuncta likes to dine with friends, with many larvae inhabiting one shoot and moving to the largest new shoots 3-4 times during development (Mook and van der Toorn, 1985). The moths’ burrowing and feeding can have major impacts on Phragmites, wilting the shoots from the top down and attacking up to 90% of stems in a stand (Blossey, 2014). A. geminpuncta can reduce stem biomass 22-65% in the field (Häfliger et al., 2006), and can also reduce stem height and the percent of flowering stems. Archanara moths may also help other “secondary attacker” insects infest Phragmites in two ways: 1) their stem entrance holes and production of feces inside the stem encourage infestation by other insects, and 2) they trigger the plants’ stress response to produce narrow side shoots that other insects feast upon (Tscharntke, 1999, 1989). Click here to see photos of A. geminipuncta larvae and adults.

How can you tell if a plant is infested? Infested shoots often have light brown tips and narrow side shoots (Lenssen et al., 2004). Larvae or their droppings can be found inside the stem.

When will they be released? Researchers at Cornell University and elsewhere have been studying and testing possible insects for biocontrol of Phragmites since 2008. After careful consideration of their benefits and possible unintended effects, release of Archanara moths in Canada for control of nonnative Phragmites was approved by the Canadian Food Inspection agency in April 2019. In the United States, the Technical Advisory Group for Biological Control Agents (organized by APHIS, the Animal and Plant Health Inspection Service) recommended Archanara moths for release in May 2020, but additional approvals and permits are still pending as of April 2021. Researchers are currently figuring out the best way to rear these insects and are deciding where to begin field experiments.

Mealybugs, midges, moths, and miners—oh my!

Plenty of other nonnative insects are found on Phragmites—some common, some newly invading. Below are some quick tidbits about each species.

Legless reed mealybug (Chaetococcus phragmitis): This mealybug takes over patches of Phragmites in the northeastern United States, and in New York can make up 60–99% of the insect biomass on Phragmites (Tewksbury et al., 2002). In some places, birds like Black-capped Chickadees have learned to forage for them. The mealybugs overwinter and feed under Phragmites leaf sheaths (Blossey and Weber, 2000).

Hungarian Gall Midge (Lasioptera hungarica): Thirty to three hundred orange larvae of the Hungarian gall midge can live inside a single stem segment of Phragmites and infested plants show little signs of invasion other than brittle stems. The midges cozy up in their stem section with a symbiotic black fungus (Sporothrix) that provides another food source for developing young (Baetens and De Bruyn, 2001; Blossey and Weber, 2000). The nonnative small gall midge (Microlasioptera flexuosa) lives a similar lifestyle.

Rice grain gall midge (Giraudiella inclusa): The rice grain gall midge burrows into the stem of Phragmites and forms a small, hard gall (shaped like a rice grain) around itself, which can cause a protuberance in the stem. Multiple midges may form galls together in same part of the stem. Fun fact: in England, nine species of parasitoid wasps use the galls made by these midges (Jennings, 2020).

The rhizome miners, large wainscot (Rhizedra lutosa): The large wainscot moth is one of the few insects in North America that attacks Phragmites rhizomes. First the larvae feed on young shoots, then dig into the rhizomes where they eat, grow, and fill their home with droppings until it is a hollowed husk. You can tell if a plant is infested if the leaves are pale and easily broken, but the rhizomes would need to be investigated for presence of larvae (Tewksbury et al., 2002).

New! Roseau cane mealybug (Nipponaclerda biwakoensis): The first population in North America was found in 2016 in the Mississippi River delta. In its native range, the mealybug can make up over 83% of the insect community in Phragmites, and it is possible to find over >2,000 per stem. It is also more damaging to native than nonnative Phragmites (Knight et al., 2018). Like the legless reed mealybug, the roseau cane mealybug prefers to hang out under the leaf sheaths of Phragmites, but also colonizes new shoots.

If you’d like to learn more about the insects above or other Phragmites herbivores, check out the links below.